A centralized version control system, has a single server that contains all the versioned files, including their history, and a number of clients that check out files form that central place.

A decentralized version control system (such as Git, Mercurial, Bazaar, Darcs etc.), mirrors the respository (including all history) to all clients.

Every time you commit, or save the state of your project in Git, it basically takes a “picture” (also revered to as a snapshot) of what all your files look like at that moment and stores that snapshot. You can think of this snapshot as a copy of all files in your working folder (that are tracked).

By using these mechanisms Git does not have to store deltas at the file level, to be efficient on storage and fast will be extremely fast, when previous snapshots should be restored.

The snapshot will get an identifier associated with it (a SHA-1 of the snapshot content). A SHA-1 is a 40-character checksum string composed of hexadecimal characters (0–9 and a–f) that uniquely indentifies the contents of the snapshot.

Now there are serveral ways you can work with Git. This blog post describes the way, we use Git.

The following diagram describes the proces of cloning a remote Git repository and making you first change to it on a locale repository. 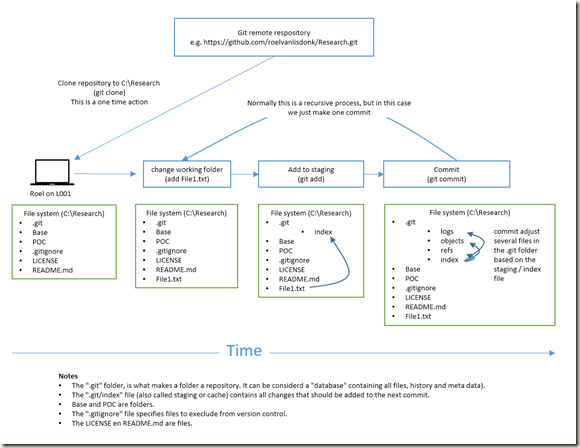 The following diagram describes the process of fetching and merging remote changes to a local repository and then pushing local changes back to the remote repository: 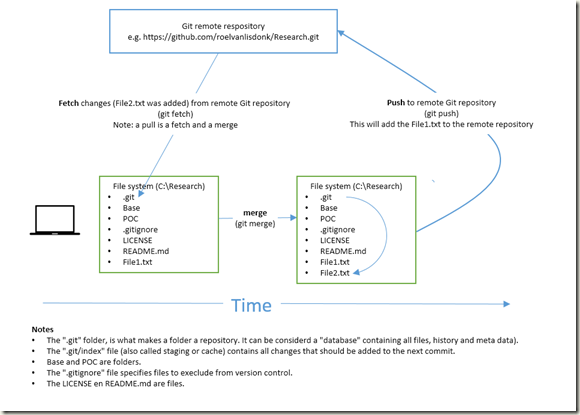 We use 3 long lived branches and short lived feature branches on the remote git repository:

Now this is not perfect, but you can add branches for QA, test or pre-prod, at will, but  maybe you don’t want a branch for each “software life cylce” step and just want to use branches foreach release, thats all up to you.